It soon spread across the globe and is now used in almost every field. We use it so often that it’s almost invisible to us. It has, more than any other lens, shaped our ways of seeing. The problem is that it has a flaw that limits our perceptions.

To understand what this flaw is, we need to go back to Newton’s time and see how he first discovered his “laws of motion” and set down the fundamental principles of science. (For a more complete discussion of this subject, see chapter 3 in the book Lenses of Perception.)

Isaac wanted to know why the planets in our solar system circle around the sun. He had a hunch that gravity, the same force that causes apples to fall from trees, is the cause, but how could he prove it? 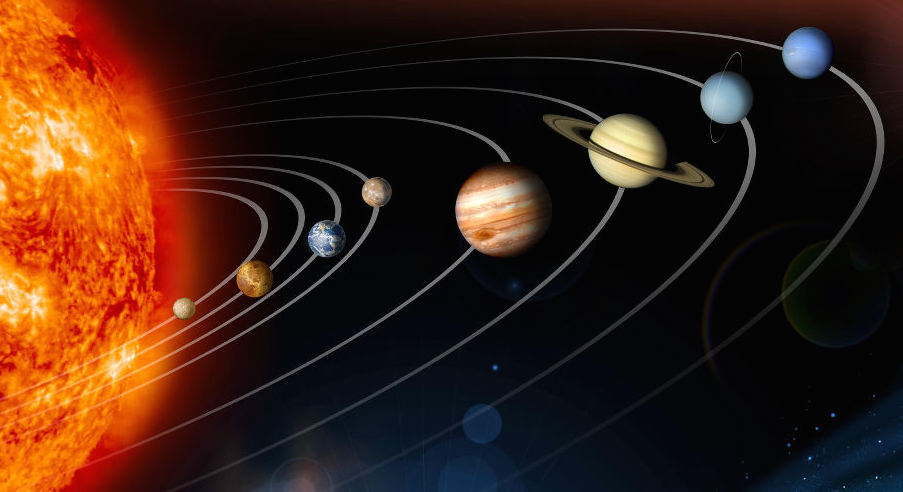 Newton wanted to understand the force that keeps the planets in orbit around our sun. Illustration by NASA.

Newton invented a new type of math, called calculus, to describe the changing motion of the planets. Unfortunately, the general formula for changing rates of motion is infinite—it never ends. It looks like this:

The three dots at the end means that it goes on and on forever. That makes it way too complicated to use.

Fortunately, Isaac knew what the formula was describing, so he saw a way to make it simpler. For example, if we’re studying an object moving through space at a constant speed, then the infinite equation reduces to this:

The distance an object moves over time = V

“V” in this formula stands for the velocity of the object—in other words, how fast it is moving.

This became Newton’s first law of motion. It says that all things continue moving in the same direction, and at the same speed, unless they’re changed by a force. Until a force acts on them, their own momentum keeps them on the same path, moving at a steady pace.

This idea seems obvious to us today because we’re so used to thinking this way. But it was only sixty years before Newton that Galileo first proposed the idea. Galileo claimed that the Ancient Greek philosophers, who said that a force was needed to keep an object moving, were wrong. Newton showed that Galileo was right and this is a fundamental law of our universe.

To describe the movement of Earth around the sun, however, Isaac needed a different approach, since our planet is continually changing its direction. He couldn’t use the infinite formula produced by calculus, but he could reduce the equation to something simple if he once again limited his study to a special case. This time he focused on the change of motion produced by a single force. If that is all we care about, then the formula produced by calculus is:

This is Newton’s second law of motion: Force is equal to the mass of an object (m) times the rate at which it accelerates (a). It tells us that acceleration is the direct result of the magnitude of the force. If a force is twice as strong, the object will accelerate twice as fast. It also says that, any time an object speeds up, slows down, or changes its course, a force must be driving it.

So, the impossibly complex formula for movement was reduced to two simple equations: One that describes steadily moving objects, where motion continues because of momentum, and the other describing a single force causing objects to accelerate.

This is the tool Newton discovered. It describes cause and effect and shows us how to study forces, one at a time, by seeing the changes they produce.

This idea was quickly adopted by every field of science. Even sociology, when it was first founded as a scientific study, used the principle to study the social forces that move people. Around the same time, Freud began describing the psychological forces that are motivating factors in human beings. And economists started seeing the economy as a closed system where prices were driven by the external forces of supply and demand.

What happens when a tool is used so often that it becomes common? It strongly shapes our way of seeing the world. (See What Are Lenses of Perception? for more information.) And this is exactly what happened, since everywhere we look today we see causation at work. Forces move objects, people, and economies.

In fact, within a hundred years after Newton published his laws of motion, it became common to talk about the universe and everything in it being driven by forces. All the stars, galaxies, planets, hurricanes, volcanic eruptions, and the whole world of nature was nothing but a giant clockwork.

Unfortunately, there’s a flaw in this lens. Can you see where it comes from? 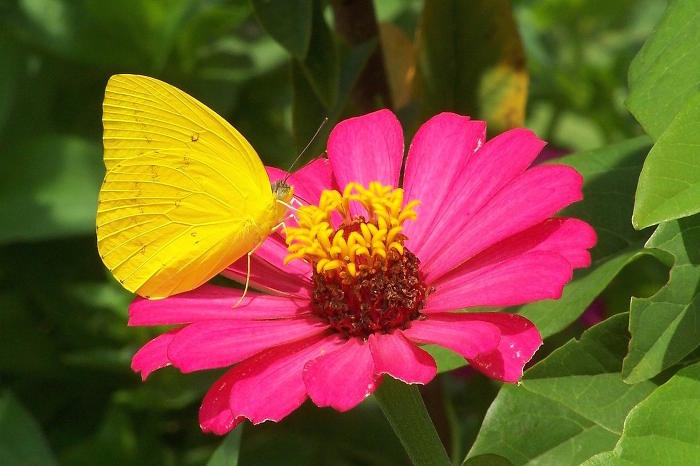 The movements of creatures aren’t driven by outside forces. Their actions spring from within. Scientists haven’t been able explain this spontaneous behavior. Photo by Davy Siahaan.

Remember, Newton picked a special case to simplify the formula for motion. He looked at forces acting on objects from the outside. What about living creatures that change direction from within themselves? Can we apply Newton’s approach to see where the autonomous actions of organisms come from? Can we reduce the self-driven movements of plants and animals down to mechanisms? No, we can’t.

“Okay, we may not have the answer today, but every day we get smarter and smarter, learning more and more through new scientific discoveries. Surely, one day we’ll be able to understand the building blocks of life.

“But the problem isn’t a lack of intelligence. We’ve been running into this wall for hundreds of years. Brilliant people have tried solving it. We don’t need more brain power. We’re missing something basic.

“What if we can’t reduce life down because it’s impossible? The question staggered me. I had to think about it over and over. Could this be true? Finally, the realization hit me: Newton’s principle of cause and effect can’t help us answer this question because it tells us nothing about causes originating from within. It applies only to external forces.

“Does this mean that science will never, ever, be able to explain the secret of life? Never? No, but it suggests that we need a different approach. We need new tools and a fundamentally new lens to show us how powers can originate from within.”

From Lenses of Perception, page 28.

The lens of perception that formed from using Newton’s approach to study cause and effect is based on the idea that forces act on objects from the outside. In other words, it is a third-person perspective, as if we were standing outside of the action and looking in as observers. This is the lens of science. It’s a way of seeing that dominates scientific research today, even though it has a number of limitations.

For example, third-person lenses can’t see where forces originate, the intentions behind actions, or the purposes of those action, to name a few of the smaller issues. Most scientists treat these as pesky mosquitos. They’re easily ignored. And if you are dealing with mechanical reactions, they can be overlooked because they play no role.

However, if you only look for truth through third-person lenses, then these three little issues change your whole perspective. Reality no longer seems to have a purpose. You can’t see any meaning to life, since everything is just the result of a chain of reactions. One domino knocks over the next.

This is where the “post-modern” view of life comes from. It has infiltrated every aspect of society, especially our schools. This is the result of seeing only through third-person lenses.

Recently, the problem has grown much bigger, however, since we find ourselves faced with the paradoxes of quantum mechanics and the bizarre behavior of sub-atomic particles. And leading biologists have come to the conclusion that we not only can’t explain the origin of life, we don’t even know where to start looking for an answer.

Plus, physicists discovered a serious problem with the way our universe evolved. For some reason it seems to be exactly designed for life to exist. They don’t know why. This is made worse by the fact that science doesn’t know why life exists in the first place. 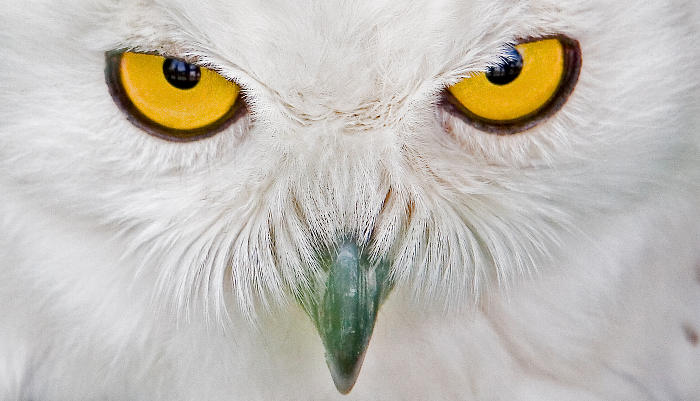 Living things possess a spark that cannot be explained by mechanical reactions. Their actions cannot be predicted by any laws. Third-person lenses can’t make sense of it, but other lenses can. Photo by Kristof Degreef.

And how do our minds move our bodies? Science is no closer to answering this question today than it was two hundred years ago. We simply don’t know. Or how does consciousness emerge from brains, as most biologists believe? No one can explain it.

It turns out that all of these issues, plus many more, originate from the flaw in the lens of science. We need a new approach—a new way of seeing to make sense of these mysteries. A new lens that helps us see things not only from the outside, but from the inside as well.

“Don’t fall for the story that organisms are complicated, as if this explains why reducing them down is difficult. What if life is irreducible? What if we’ve been missing something? What if a new lens could reveal the problem? Then, as Rosen says, “the consequences are profoundly revolutionary.”

From Lenses of Perception, page 40.

See also the next in this series: A New Foundation for Science

4 thoughts on “The Lens of Science and Its Flaw”